There are certain places every homeless wanderer knows are good ones at which to start when it comes to setting down roots and making contacts in a new town. One of the best is confined to towns with a relatively large transient population, and Brighton certainly fits that bill. So it was that we followed our new friends under the pier deep into the backstreets on our first morning to find the Day Centre. I have a vague recollection that it was called St Ann's or St Ann Street, something like that, I'm not sure. It was not somewhere we visited very often afterwards. What I do remember was coming out of an alley onto a fairly main road, with a church fronting the street and the day centre attached to it's side. It didn't open until 9am, and this was a little before that. Outside was a large gathering of all kinds of flotsam and jetsam, ragged people of every shape and kind.

One thing you have to understand about the homeless community in larger urban areas back then was that it was very definately divided into groups. There were your classic tramps and bag ladies, the permenant residents of the town's bridges and doorways, who had control of the best skippers and woe betide anyone who tried to step on their patch. There were your Brew Crew - generally site travellers whose affection for a drink had led them to lose their vehicles for while, so they ended up with the streetlife until they got it together to return. There was the punk squatter element, who didn't class themselves as homeless at all, who only "lowered" themselves to mixing with the rest of us in order to "work the system". Then there were the homeless travellers like us, whose dream was of one day being on site, and who considered themselves free rather than downtrodden. Of course, apart from the first group they were all kidding themselves. They were all just as down and desperate as each other. But it is human nature to build hierarchies - humans are pack animals, just like dogs, except humans have more hangups. We dogs just had a fine old time, without the delusions of status.

Of course, it was never as cut and dried as all that. The "real" homeless held all the genuine power, and looked down on everyone else, who in turn looked down on them as "dirty tramps". Just as well there are no mirrors in the gutters, eh? The Brew Crew lorded it over the Punk Squatters, even though they were often one and the same. In fact, usually the Brew Crew were the ones who had "bettered" themselves by having been on site - even though they'd managed to screw up even that. The Squatters looked down on the Brew Crew because they were always banging on the splintered and broken door and taking refuge. The Brew Crew looked down on the Squatters because they had never been on site, even though it actually took a fair amount of organisation and brains to open a squat and keep it open for any length of time. Of course, none of this was ever openly talked about, which in turn meant that fights were forever breaking out over something and nothing, with no-one fronting up to what it was really all about. The Travelling Homeless looked down on all of this because actually they were terrified of it. The tramps drank. The Brew Crew drank and took drugs, the Punk Squatters drank and took drugs, whilst the Travelling Homeless just toked and had the odd can here and there. They were better because they weren't useless pissheads. The fact that they were useless potheads instead passed them by completely. All the groups were arrogant, all of them used that arrogance to cover up their underlying fear of each other, and all of them were forced to mix to a certain extent in order to get what they needed to continue on their spiral of self destruction. Consequently, Day Centres were violent places. And they closed early.

This all probably seems a little harsh, considering I'm talking about "my own kind". Back then, of course, I was nothing but a pup, curled up under Eyes' coat. The politics of the whole thing went straight over my fluffy head. But one thing even a puppy can do is take in atmosphere, and this atmosphere with all it's undercurrents terrified me. I can look back now and see how sad and ridiculous it all was, but at the time I was just plain scared. Eyes was too, that I could also sense. She wore a floor length coloured skirt, and I liked to curl up under it, lying on the folds of fabric which gathered beneath her legs when she sat, the front section hiding me from the world outside. I felt safe under there. I never even noticed that her legs were trembling. 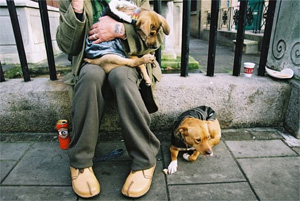 Man, an arrogant little sod to start with, simply puffed up even more when he knew he was out of his depth. The louder he proclaimed his own virtue, the more you knew he was quaking inside. We stayed away from the anarchy of all this most of the time on our travels, but he needed his smoke and therefore he needed to convince the Brew Crew and Punk Squatters who had control of it to sell it to him. And so there we were, Eyes and I, sitting quietly to one side, my nose barely poking out from under my safety curtain, watching them all strut there stuff in the pantomime which is the status battle of the streets until the big wooden doors swung open at 9 o'clock sharp and we all piled inside.
Posted by Mad Dog at 03:04 No comments:

The Root of the Trouble

It will have been noted by the more observant among you that an awful lot of this story so far has revolved around the presence of sickly sweet smoke. In those early days before we left Salisbury I was aware of both Man and Eyes' capacious appetite for it, but familiarity and Eyes' contacts in the town meant that it was just something that was always around, never a big deal, and certainly never lacking. What I never noticed then was that whilst Eyes would indulge quite happily of an evening, Man was toking constantly. The other thing which never raised it's head until we got to Brighton and the supplies ran out, was what would happen when there wasn't any.

I am older now and have taken in more over the years than people would expect for a dog. I know that Eyes never actually needed to toke, just that she liked to...and that she picked it's time and place. She wouldn't smoke pot in the mornings before doing her work. She rarely had anything during the day, only the odd puff amongst friends before retiring to whatever godforsaken hole was home at that particular time. And when there wasn't anything to smoke, it didn't matter. Hash was a pleasure, not a prison. It was an enjoyable thing to do when relaxed, not the only way TO relax. Sure, she was no angel - I later learnt that before I came along she had been tempted down the road of fiercer recreation in the form of Speed and Acid. But it bit her back hard, and by the time I arrived in her life was just one of those mistakes she'd made and learnt from. Maybe that was why she never got herself too deeply "involved" with cannabis on a personal level - certainly the capacity for going overboard was still there, as will be evidenced much later in this tale, but at that time it was as far from a problem for her as you can get. 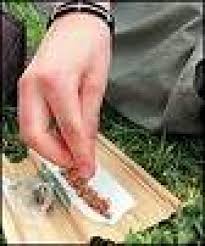 Well...I say that...but there is such a thing as co-dependancy, and that was what proved to be her undoing. Co-dependancy is when the partner of an addict becomes as wrapped up in an addiction as the user themself. There are many reasons why people fall into this trap. In Eyes' case it became rapidly obvious that fear was the main driver. She wasn't then, and still isn't, a person with a great deal of confidence - despite all appearances to the contrary if you meet her today, but that would be leaping ahead again, so all in good time. It would be a trap she fell into more than once, and one which has shaped as great deal of our lives together as she has learnt to avoid it, and reacted against it in turn. It shapes the way she has relationships now, albeit in completely the opposite direction. It is every bit as insidious as addiction itself, and can lead to addiction itself in an attempt to break free from it's shackles.

But hang on a minute here, I hear you cry. We're talking about cannabis. Pot. Dope. Grass. Weed. That harmless natural plant beloved by all hippys since time immemorial, the antidote to the hard drug bad press. How the hell can anyone get into trouble with a bit of pot for crying out loud? The answer is simple. In moderation, cannabis is - for most people at least - no more damaging than a civilised glass of wine, a quick pint, or a strong cup of coffee to get you going in the morning. But what about when that glass of wine every night becomes a bottle? When that quick pint after work becomes 3 or 4? When you need an entire jug of coffee just to wake up, never mind function? Then you have a problem. And believe me, when it came to his hash, Man had a problem. A BIG problem.